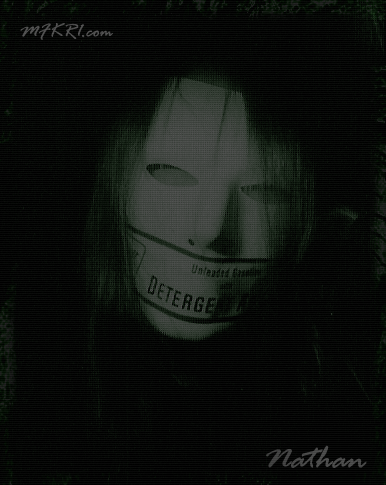 Name: Nathan Jonas Jordison
Nickname: Joey, Superball
Born: April 26
Instrument: Main Drumkit
Mask: Joey’s mask was a Japanese styled Kabuki mask called 1983 Cesar blank male. He says he chose it cause it can represent anything, it can be twisted into anything.

How else does one become as good on drums as he is? Very sure of what he wants and how he plans to get it. Joey can be seen on the front cover of Mate. Feed. Kill. Repeat. – the picture is called ‘Patiently awaiting the jigsaw flesh.’

In his freshman year at Waukee High School, Joey was part of a band named, “Avanga”. However due to a lack of motivation from other members, Joey looked elsewhere – Music was his only escape. Joey soon started a new band with his neighbor Tim, the band was named “Modifidious”.

It was a “speed-metal-thrash” band and 15 songs were written in quick succession. Soon a bassist, Ryan, was found along with a guitarist named Jay (formerly of Avanga). The band, with new guitarist Bruce, had their headlining slot as a support to future Slipknot guitarists Jim Root’s band, “Atomic opera” at the Runway. Bruce soon left Modifidious to join Atomic Opera and as a result a new guitarist was required. His name was Craig. Then another drop out came to Joey’s band; Tim left in the summer of ’92. Josh soon left his band to join Modifidious as a vocalist and filling Tim’s spot.

This new line up soon put out a quick demo which was recorded within Joey’s basement and mixed in Craig’s house. It held the name of, “Visceral”. Following this demo in 1993, the band played a few shows with a band that Shawn was in called, “Heads on the Wall”. This was followed by another demo, “Mud Fuschia” and later a CD, “Sprawl”.

By this CD, Joey claimed the band was, “Kings of Des Moines”, pulling up to 200 people per show and playing lots of performances shows. However the band began to go down hill with the new grunge wave and loosing popularity of Thrash opposed to Death Metal. The new Des Moines band had become Body Pit, Paul’s new band. Due to a lack of interest the band broke up in 1995. For a while, Joey played guitar in the band “The Rejects”, which would go onto become “The Murderdolls”.