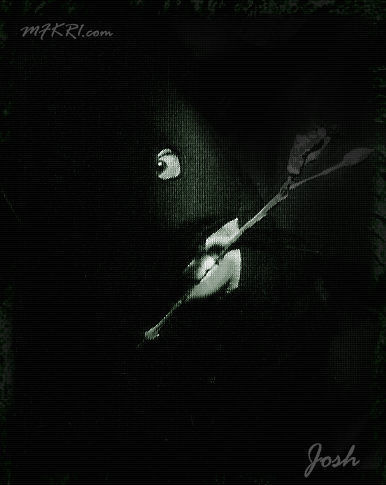 Name: Joshua “Josh” Brainard
Nickname: Gnar – Josh used to have a nervous habit of gnawing on his knuckles, so they called him Gnar.
Born: August 6th, 1974
Instrument: Guitar
Mask: Originally he wore a black ‘Executioner’s Mask’. He eventually ended up with a black bondage mask.

“He is one of the best guys I have ever met” – Corey Taylor
“One of the Des Moines’ scene’s guitar legends. He’s been amazing us on guitar since we (me, Paul, and others) were struggling to play “South of Heaven” by Slayer. He’s also a really good guy. Very emotional.” – Anders Colsefni
Josh joined Slipknot in late August 1995 and left in late January 1999 right after the recording of the band’s self titled album. Josh wrote and recorded all of the songs but Purity on that record but James Root who was his replacement is credited. Josh is pictured on the front cover with his black bondage mask, but the guy inside the booklet is Jim. Josh recorded 3 songs with Vanilla Ice in 2001 for his Bi-Polar album. This also featured Stone Sour’s Roy Mayorga on drums.