1997 saw a ridiculous amount of activity. This, of course, means that everything was also a mess. The web site was created (Posted January 1 of the year, we saw 2,960 visitors.), and is modified continually in a quest for something that will satisfy all. The quest for being able to take credit cards over the net is on, as well as putting on a jukebox with various artists’ songs on it. We started distributing Speed Nebraska (and Corn Pie) Records, as well as Two Olive Martini Records, both from Omaha.
-ismfest was renamed to “Act of -ism 1997.” The dates, and bands ran like this: Friday, October 17: Richard Schultz, The Return, Floating Opera. Saturday, October 18: Wide, Fullblown, Red Max. Friday, October 24: Scrid, Beyond, Slipknot. Saturday, October 25: Think, Ditch Witch, Ravine. It was fun, posters were again plentiful (6 were done, but Coop still hasn’t delivered his), and there was enough merchandise there to make this site look pitiful. We had a horribly large snowstorm on the last day, so Ditch Witch bailed early. Don’t blame ’em now, wish we could’ve, too, it was a nasty one.

Founder Dan Schlissel was born in Worchester, Massachusetts to immigrant parents Sam and Helena Schlissel on November 9, 1970. From early on, in the womb, actually, Dan was exposed to a wide variety of music. Dan grew up listening to just about anything that came his way, especially enjoying the tastes and influences of both his older brother and cousins, that being primarily rock records. Everything from the Beatles to Creedence Clearwater Revival to the Clash and beyond were listened to with fervor. This period would have a profound influence on future tastes.

In 1982, Dan’s family moved to the cultural mecca of Kearney, Nebraska. Needless to say, even a young Dan realized that this was a barren wasteland for the mind. Longing for the east coast, Dan fostered a taste for the music he remembered, not only of previous influences, but to that of the people as well, from heavy metal to rap.

In 1988, upon graduation from high school, Dan fled to the capital city of Lincoln, Nebraska and enrolled as an engineering major. In college, Dan became a member of the University Program Council, eventually becoming chairman of the concert and dance committee. It was his responsibility to book, promote, and work concerts on campus. This, in turn lead to a job managing local indie music store, Feedback.

Through connections made at the University and Feedback, Dan pulled his resources together and launched -ism Recordings in the fall of 1992. The first release was by Such Sweet Thunder, as noted in the label history.
Dan graduated from college in August of 1993 with a Bachelor of Science degree in physics. After working a string of lousy paying, and somewhat dehumanizing jobs in Lincoln, Dan decided to relocate to the Twin Cities, building a brighter future for -ismist, himself, his future wife, Suzanne, and the drone worker in general.
In 2000, Dan started to fold -ismist Recordings. He has been working on his newer venture, Stand Up! Records while occasionally revisiting the -ismist catalog, most recently with the Killdozer tribute album, We Will Bury You. 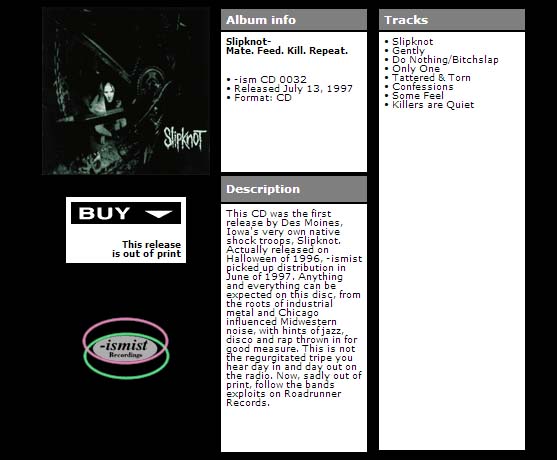 Click here for an interview with Dan Schlissel
http://www.ismista.com