The fetal stages of the band Slipknot began way back in 1993 in the basement of Paul Gray. Although the band did not assemble under the title Slipknot, Anders doesn’t re-call that they had fully settled on a name yet but Clown wrote the name ‘Painface’ on one of the rehearsal tapes. The group had the aggressive feel you’d expect from Anders Colsefni, Shawn Crahan, Paul Gray and Patrick Neuwirth. During this early period the songs “Slipknot”, “Gently”, “Idiot”, “What’s Wrong” and “Wise up” were recorded, later to be known as “The basement sessions”. Unfortunately Shawn got to busy with work and the project fell through.

Who is Pat Neuwirth?
Patrick M. Neuwirth (nicknamed NEKCHECK) or Pat was in the original Slipknot line-up in 91-93.
Pat used to help Shawn Crahan’s first band ‘Heads On The Wall’ which also had Quan Nong (ex-slipknot guitarist).

When Pat was with the band, they went by the name“Pull My Finger” later shortened to “Pull”. Andy renamed the band “Painface” shortly after Pat left. Pat was the very first guitarist, but he only played with the guys for a few months during the spring of 1993.
When Slipknot reformed in late 1995, it featured a new line-up.

Why was Pat’s nickname ‘Nekcheck’?
It wasn’t, as far as I knew. That was the tentative name of the band we put-together in ’92. Not Slipknot.
‘NeckChek’ or whatever was something Shawn really dug, but Paul and I didn’t really care for as a band name. We didn’t get far enough to need a band name yet.

As for time-frames regarding Shawn and Pat, I honestly don’t know. I was busy working, raising my little boys, and trying to keep Body Pit together.

These are the tracks recorded during the ‘Basement sessions’: 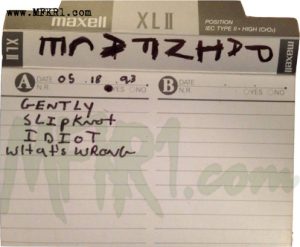