Mick used the “Battered Hockey Mask” made by Distortions Unlimited in 1990. He originally wore it untouched before cutting off the latex straps and adding 1 thick elastic strap. He then painted it green, which gradually faded to a light green/yellow. He wore this mask all the up up the early s/t and he can even be seen wearing it on the cover of the s/t album, as well as inside the booklet. 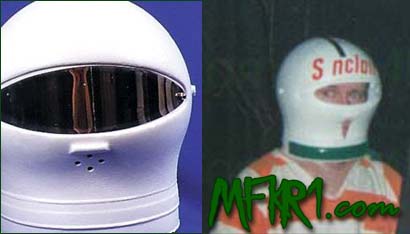 Craig used the “Space Robot Helmet Youth Size”. He added a Sinclair gas pump decal above the visor and green decals to the bottom front as well as down the middle, starting from above the Sinclair to the back of the helmet. There was also a sticker on the back, which has not yet been identified. During 1997 he removed the visor and the “I” in Sinclair as well as cutting out a hole in the front of the mask where his mouth was. He later added a Scott Aviation Respirator to the helmet. He wore a clown mask during a show in 1996 and when he was the guitarist he wore a SPAM t-shirt with pantyhose on his head. 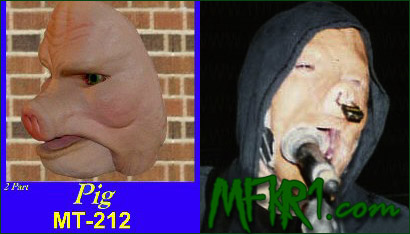 Paul used the “Two-Part Pig Mask” made by Gerard Enterprises. He removed the straps from the chin piece, then overlapped it over the top part of the mask then taped it together with black tape. He also added a “Merit Cigarette Keychain” to the nose of the mask, which was given away as a promotion when buying a multipack of cigarettes. Paul was known to wear a different kind of pig mask during an August 1996 set.

Josh used the “Executioner Hood” made by Rubies Costumes. He shortened the neck, cut/ripped out a mouth hole as well as cutting out a hole in the top to pull his hair through 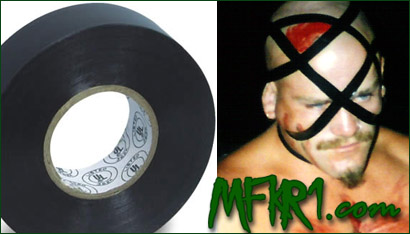 Anders used “Electrical Tape” made by 3M. Although this is not technically a mask he wrapped it round his head, face and body. He also used tribal warpaint on his head/body on occasions in between the tape. He wore his fur skin loincloth to this. 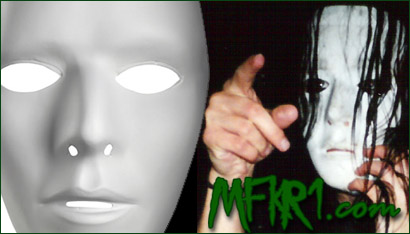 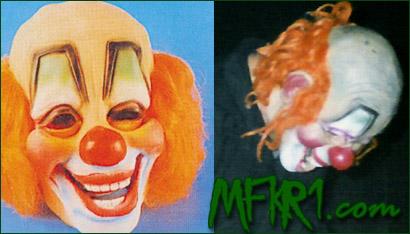 Shawn used the “Clown mit Haar” made by Maskenmanufaktur Rudel. Shawn bought this mask before Slipknot was formed and wore it to practice one day. He would put it on every time they play ‘Tattered & Torn’ and it freaked the other guys out. This went on for a few rehersals and then the other guys all started wearing their own individual masks.

“I’ve had my mask for almost 13 years. I bought it in a shopping centre about a month-and-a-half after Halloween, after everything had been sold. It was like this weird movie where things were misplaced, and you walk past something and it calls out to you which is what it did to me. It was on a clearance table and it had no reason being there, but I think it is one of the best masks I have ever seen in my life. It was there for a reason. I have to talk to it every night. We have to discuss what is going to go on. My mask is nothing without me. If we didn’t wear masks there would be so much more trouble, as there is so much pain on our faces that people don’t get to see.” -Clown ’99