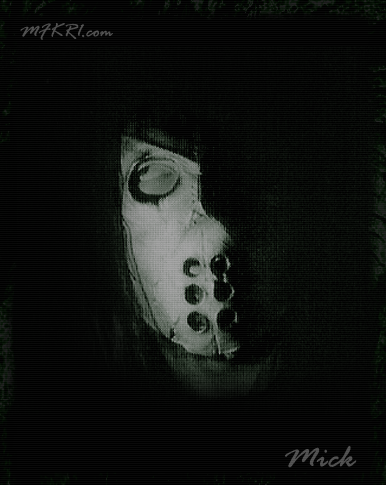 Name: Mickael “Mick” Thomson
Nickname: Seven
Born: November 3rd
Instrument: Lead Guitar
Mask: He wore a ‘Battered Hockey mask by Distortions’ during the MFKR era up to early s/t days. He modified it later on and painted it yellow.

“Avid fisherman. He & I went fishing together several times. Not as mean as he looks, by any means. He’s a good guy, although he has a fascination with Serial Killers. He has more than one mask. One is a modified hockey mask, painted a yellowish gold with more custom features. His other is a mask made to look like metal, but is black leather. Although he didn’t record any of MFKR he is still pictured on the album.” – Anders Colsefni