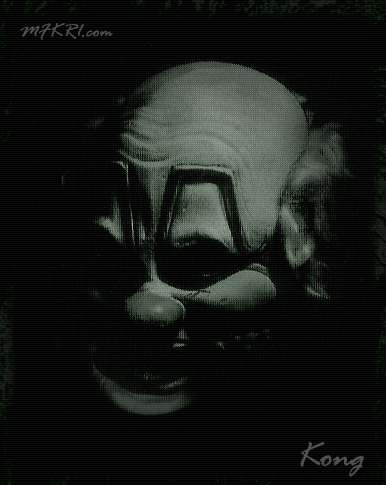 Name: Michael Shawn Crahan
Nickname: Kong, Clown
Born: September 24 1970
Instrument: Percussion titanium drum kit that he welded together himself.
Mask: His mask found him. He was walking through a store one day and on the clearance table sat the mask. He saw it, it seemed lonely, it seemed right. He bought it and has had it ever since. He was the first member to wear a mask then everyone followed. The mask is called ‘Clown Mit Haar’ and is made by a mask manufacturer in West Germany.

“The eternal business man. Very goal-oriented. Hard work ethic. Co-founder of Slipknot, Clown takes on the role of leader and co-produced both MFKR and Slipknot, very much has the band in control. Known as a jack of all trades – made his and Chris’ drum kits and makes much of Slipknot’s stage props.” – Anders Colsefni