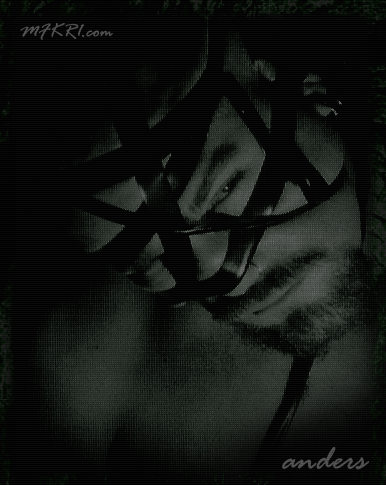 Name: Andrew Rouw
Nickname: Anders Colsefni & Corn.Wallace (originally created by Joey as a clawed monster in one of his pictures, Anders took the name on).
Born: April 15th, 1972- Black Forest of Germany(INSIDE JOKE)
Instrument: Vocals/Growls – Auxiliary percussion
Mask: Electrical tape on face, tribal war paint on flesh, fur skin skirt – The skirt is a simple contrast with the rest of me. It’s odd-looking on me. the fur helps me keep in touch with the Wild. The electrical tape is also simply an odd-looking thing. I don’t wear that stuff very often. Only on very special occasions. That was my whole Slipknot get-up. I didn’t wear an actual mask.
I wore the skirt and tape always. The paint just happened spontaneously.

Why the pseudonym ‘Anders Colsefni’? Is it really ColsefNI, or ColsefINI?
Anders Colsefni. It was the combination of two things: 1-my name (Andrew), with Colsefni which was a Viking name from the middle-ages (Actually spelt Karlsefni). I worked for a concrete outfit that were a family of Swedes, and they loved talking about Viking history and lore. I became a fan of it also, which led to my love of The Get of Fenris.

My first job was a paper route. After that, my first “real” job was McDonald’s.
Co-founded Slipknot along with Shawn Crahan, Anders was the original vocalist of Slipknot. He’d under seen the recording of Slipknot’s EP Mate. Feed. Kill. Repeat. Slipknot thought that in order to make the next transition to find a major label they needed a more radio friendly voice rather than the deep Max Cavalera like grunt of Anders and so they brought in Corey Taylor. The band wanted Anders to do back up vocals and handle percussion, but he got bored of the idea and quit publicly before performing Heartache and a Pair of Scissors (Scissors) for the last time. After Slipknot, he licked his wounds and formed PAINFACE, and he started where MFKR left off.