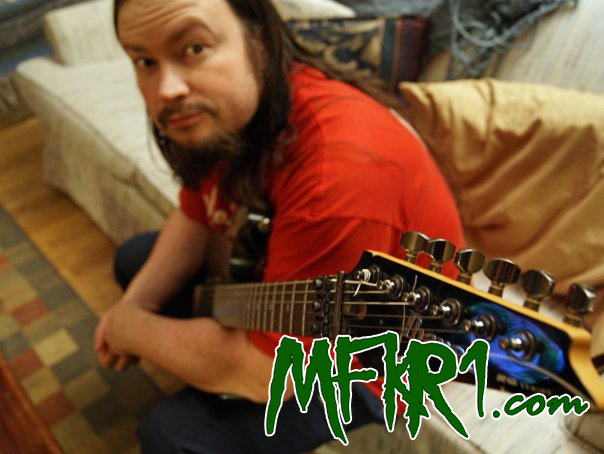 First of all can you tell me your full name, when and where you were born and what was it like growing up.

My full name is Donnie S. Steele. What was it like growing up? I grew up on the East side of Des Moines. I played a lot of sports, but wasn’t really any good at them. Football has always been my favorite. I was always into fishing and the outdoors. My Mom lived in the city and my dad lived more out in the country a bit so I experienced both.

When did you first start becoming interested in Guitar, and what was your first guitar?

I guess I was about 13 when I really took an interest in guitar because I had a few friends that played. It wasn’t until I’d turned 14 that I actually bought one and then that was it I had a burning passion from day 1.– No sports……minimal effort in school….. everything was guitar. I didn’t work a lot during those years of high school and I didn’t really party as much as some….. I just practiced constantly. I had a guitar in my hands constantly. Metal, Rock, Blues, Classical….I’ve always been into a bit of everything. I took lessons for a few years with some really great teachers and my junior year of high school I started teaching others at the shop I started at, Ye Olde Guitar Shop in Des Moines. That would of been in 88′. I’ve been teaching ever since.

My first guitar was a Hondo Strat copy…I cycled through a few the first few months until I got my first Charvel as well as my first classical guitar.

I was in a few various versions of metal and cover bands in high school, and did some recording with a christian metal band. A few years later a drummer friend, Ernie McGinn, and I started jamming with Paul. He came over, started jamming with us for a couple months and recruited us into a death metal band he was in. That band was Body Pit. Body Pit was a great experience for me. I was really able to stretch my playing and song writing. I also made some great friends and had great times in that band.

What was Pyg System?
You got me…..

Even though I’d been in other projects with Paul, Joe, and Andy over several years I’d only been in SK for about 7 or 8 months. We only did one show. It was a benefit show we did while we were in various stages of recording MFKR.

What equipment did you use in the band?

What was the reasoning behind you leaving?

I left for a few reasons and none of them were personal……I didn’t have a beef with anyone……far from it. In fact, those were the people I partied and hung out with. Paul and I were good friends and partied and wrote a great deal back then. I had a lot on my mind spiritually and other areas of my life that needed attention.

Were you in any other bands after leaving, and can you tell us about them?

I’ve been in many bands over the years and many styles. The one most might be familiar with was Killpact with Ernie McGinn. He was Body Pit’s drummer and one of my absolute best friends. He passed a few years back. Awesome drummer and friend. He is truly missed….for now.

Currently I’m in a recording project with a great friend of mine on drums, Nick Medinda. It’s a progressive metal, fusion instrumental project. I’ve recently updated everything in my home studio. I think we’re looking to finish up a 5 song EP real soon and are going to be collaborating with some friends as well. I think the music is a better representation of my playing and writing. MFKR was very spontaneously written. I think we wrote about 14 songs in 2 and a half months. I was actually a bigger fan of the BP stuff. I think it smokes MFKR.

Since leaving what have you been up to?

Writing, recording, playing in regional bands…..a lot of teaching…..and I have family that I enjoy spending as much time with as I can.

Have you kept in contact with any of SK?

I kept in contact with Paul . I see Andy, Josh, and Shawn from time to time. I really didn’t know Corey back in the day, but have gotten to know him since. He’s a very talented guy and turned out to be very cool. He’s good friends with my girlfriend and our kids are friends.

So far a lot of writing and recording. Looking forward to pushing some sonic boundaries.