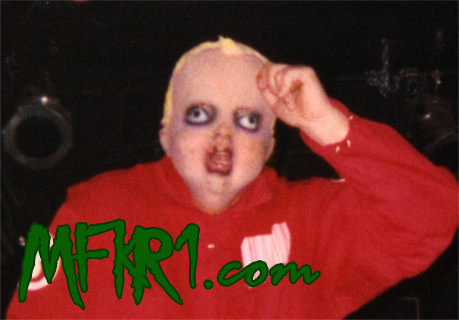 Q 1 – When did you join Slipknot, and how did it happen?

A: I believe I joined sometime around the end of 1997. It was the end of 95 myself Paul and Joey played in a punk band called The Have Nots while they were in Slipknot with Anders. When they wanted to separate front percussion from lead vocals and recruit Corey Taylor from Stone Sour. Anders wasn’t keen on the idea of just playing percussion having been the singer and quit..can’t blame him really. That’s when I was approached by Paul and Joey at a Have Nots practice to audition and got the gig.

Q 2 – Do you remember who’s idea it was to wear the coveralls?

A: I wanna say the coverall idea was Shawns. Pre corey taylor everybody kinda did their own thing but once Corey and I came into the band there was a sense of unifying everything together our different entities with the masks, and numbers. But one machine in the identical coveralls.

A: I really can’t remember the whole number process. I believe to a degree some of us had an opportunity to choose as my # was 3 , was my favorite number as per it’s the universal mathematical number.

Q 4 – Did Slipknot ever wear the coveralls without any designs or logos on them?

Q 5 – Where and when was your first show?

A: My first show with Slipknot was early 98′ not sure of the exact date. It was in Lincoln Nebraska, @ a place called Knickenbauchers , a biker bar that was half music venue and half tittie bar. Pretty sure there was some shady shit going on in that place…I remember being pretty nervous for the first time in a long time..and excited as well since I had always been a drummer in the back , this was my first opportunity to be up front on stage

Q 6 – Do you have a favorite memory or a gig you’ve played with the band?

A: My favorite show by far was when we were going through a bidding war with a ton of different labels and we played the Eat Em’ Festival in Las Vegas..a showcase festival very similar to South by SouthWest in Austin Texas , these festivals would be filled with A&R reps from every record label out there..we did play a very long set but the amount of energy in the air at this fucking place was like a drug. IT WAS AWESOME

Q 7 – Did you record any demos with the band in the studio?

A: The only recording I did was the demo we did at SR studios. It was a 4 song demo we recorded specifically to shop out to labels. This demo included Spit it Out , Wait n Bleed , and don’t recall the other songs..damn guess it’s been a while. sorry man

Q 8 – Do you have any footage from that era? (1997-1998) and if yes, would you consider releasing it just like Andy’s doing on his official website? (www.anderscolsefni.com)

A: I don’t have any footage. When paul died, Sid gave me some still photos from the early days with Paul and I on stage. But it was when myself and Corey joined the band all media ,video, photos of the band were on lockdown..to try and create more hype for the band. Theory was if there was nothing to see then you would have to drag your ass out and come see us for yourselves..and it worked..really well , we had a road manager back then before Roadrunner named Aaron Keltner who would rip the film out of your cameras and apologize after if he caught you…nothing was allowed..and any media stills or video the band had stayed in a strong box and individually weren’t allowed to have..

Q 9 – How did you come up with the Babyface mask, do you still have it?

A: As far as the babyface mask goes, that would’ve been Shawn Crahan and myself. It was shortly after I made the audition. Shawn and I went on a roadtrip searching for the perfect mask and it was all about the babyface which was the original dutchboy mask from tbe Devo videos. We airbrushed it a bit to look strung out and called it a day

Q 10 – You have a new band, can you please tell me more about it, what kind of music do you guys play?

A: My new band is called Rumble Seat Riot out of Des Moines Ia. , we’re a 4 piece Rockabilly meets serious RocknRoll band..which takes me more back to my punk rock roots growing up in Los Angeles. It’s a blast and truly where I want to be with music right now

Q 11 – Why did you leave Slipknot? And why are there so many different rumors about you being fired? Can you clear that up for the fans?

A: Contrary to popular belief there’s alot of misinformation out there on the world wide spiderweb,I wasn’t fired from the band for drugs or my lack of dedication. It was simple romance, I was dating Joey’s sister Katie at the time and he was convinced everybody fucks on tour so I was given a choice the band or his sister, and when the rest of the band didn’t have my back I chose his sister..bands will be bands and there will always be bands…but will you always have your integrity…and stand up for what you believe in?

Q 12 – Do you have any future plans, with your new band (concerts,releases)?

A: As far as the future it’s all Rumble Seat Riot currently we are recording our new album Locked Cocked and Reloaded. Which should be out next spring..along with that will be a single and a limited ep pressing, both will be released on vinyl. Our second music video for Bossman will be shot next spring…we continue to tour so look for us coming to your town….Rumble Seat Riot is Butchie “cuddles” Spektor-drums , Gene Senn-guitar,vocals , Larry Kaster-upright bass ,Adam Searle-guitar