1.) How did you get involved with Slipknot? Was this the type of band you usually worked with?

Funny story that. What happened was that a good friend of mine and I decided to take a trip to Des Moines (three hours from home – Lincoln, Nebraska) to see the Humpers and Nashville Pussy on a Friday night and Unsane the next day at the Safari Club. This was in May of 1997. We got to the Safari at about 9PM, not realizing that the Humpers played an early show and had already finished and left. Anyhow, we the Safari was building a reputation as a cool place to play, and as I run a label, I started getting lubricated, and on good terms with the staff there, including Dav-o the booking guy, and Shawn, the owner.

Shawn also happened to be in Slipknot, he told me about the band, and slipped me a copy of MFKR, which had come out the previous October. He said to listen, and if I liked to call and maybe we could work together. Listened to that CD almost the whole way home. Slipknot were not what I would normally listen to, being based as much in metal as they are. I like the punk noise thing more, but I could see working with these guys, since the two branches of music aren’t that far off.

I called Shawn the next day, and soon he was visiting my crappy apartment in Lincoln, with their manager, Sophia John, who was a native Lincolnite. Next thing you know, I am distributing Slipknot’s CD, and I had in my possession all copies that remained of their pressing (386 copies of the 1000 printed).

2.) Were you aware how crazy the band was before you signed them, with respect to masks, etc?

I knew about the masks and thought that was a cool angle, but I didn’t see them until after I was distributing the record. It was amazing. Anders was still in the band, as was Josh. 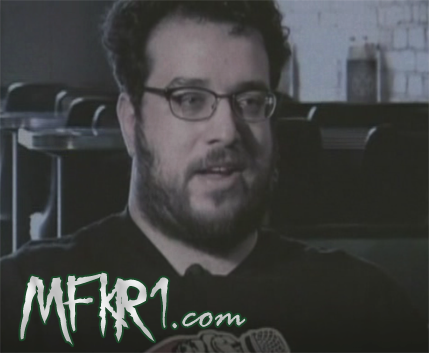 3.) Who do you think was the leader? Shawn was/is/will always be the leader. It’s his band. He was the only one I was supposed to talk business with, though all members knew me.

4.) What was your most disappointing moment with the band?

This gets into some serious shit talk. My most disappointing moment with the band lasted a good while, basically around the time I moved from Lincoln to Minneapolis, through them getting signed.

Obviously, I am a small fish in the label pond, I make no bones about that, but I did help the band get into larger chain stores (like Best Buy) that they couldn’t have gotten into themselves. This means that every copy we moved could be tracked through SoundScan, which is how Billboard tracks what’s hot in the nation. SoundScan can also be tracked by region and even City. Major labels and radio keep an eye on this as well, so they know what’s hot, it’s a marketing tool, basically. When they see something that isn’t on a major, or a bigger indie, they start to sniff around.

If you couple this with the fact that their manager was a DJ, and had industry connections, it was bound to explode.

The distributor I dealt with to get into Best Buy was slow to pay, so the money due to the band was delayed a bunch. This made Shawn edgy at best. The money thing certainly didn’t help.

Eventually I got paid, and the money went out to the band. By then it was too late. It seems as soon as big label offers started coming in, Shawn decided it was time to forget people who helped them in the beginning.

Anyway, being part of the inside team, and then being forced outside was difficult, though not as difficult as the fact that those guys never mention me, and never said thanks. It would have been a nice gesture if they’d have sent me a copy of the S/T record when it came out, or even called once when they were in town. Never to be.

5.) Was it just a matter of time before Slipknot made it BIG? Was it necessary to bring in Corey?

Yes, the energy was certainly behind them. It was just a matter of time. I don’t think even they expected to be as big as they’ve become. I hope they enjoy this part of the ride. I don’t think it was necessary to bring in Corey, but I wasn’t part of the inner circle on that, so I couldn’t say what I thought Anders’ strengths/weaknesses were compared to Corey’s. Anders is more intimidating as a frontman, I think, Corey has a better range. I like the intimidation factor quite a bit. Plus, Corey was joining a known quantity at the time, whereas Anders was forging new ground as he went. I’d say Corey has certainly done well with the band since joining, though.

6.) As -ismist was the distributor of MFKR, what influence did you have on the band?

As far as the music, none. As far as paying attention to sales and running the merchandise like a business, I think I had some influence. I showed them that this portion needed to be organized as well, and that it needed to have an eye kept on it. Basic stuff, really, I think they’d have caught that eventually. I think they were just at the point where they needed some extra people that weren’t band members or girlfriends running some parts that were just as important to them. Roadies, manager, etc.

7.) Is their any concerts that standout from the rest and can you describe the atmosphere?

They played a label festival I put on, and played to like thirty people, their first show in Lincoln, but they threw down like it was Des Moines, and the room was packed to the gills. Very impressive.

8.) Do you feel as if your work and the guys work with MFKR will never get the chance to be appreciated as it should?

I think my work won’t, but I do think that the guys will eventually see that there are a lot of fans out there that want to know more about the past, and eventually they might allow for some of the old stuff to be re-released. I hope they do re-release it some day. I also hope they’ll release some of the post MFKR stuff they recorded with Anders. I’d like to hear that all again sometime.

9.) Which elements are missing from “Slipknot” that MFKR had and do you think that they’ll ever be as experimental?

I doubt they’ll be that experimental unless they last a good long time. I miss hearing Anders, it would have been awesome had he not gotten bored, and maybe wasn’t shoved off to the side, an alternating Anders/Corey thing would be amazing. I liked the slower pace of the song “Slipknot” – now known as “Sic.” For all their experimentation, I really never liked the song “Confessions,” especially when compared to their other stuff.

10.) Was -ismist confident about working with the band after MFKR or did you know you lost them after that?

I was always promised vinyl rights to the S/T record by Shawn, so my confidence was really high, but the money thing hurt that. I was pretty confident about it for a while. When I realized it wasn’t going to happen, I became very bitter. Still am to some degree, especially when everyone I know points out every success that they’ve had. It wouldn’t have cost them anything to honor their promises, either. Whatever, it’s all in the past now. I’ve got other records to keep me occupied.

11.) Going back to the release night of MFKR what was it like?

Wasn’t there, it was on Halloween of 1996, and I didn’t get involved with the band until May 1997. It was intense watching their crowds get bigger and crazier, though.

Thanks to Dan Schlissel, the owner of -ismist Recordings and distributor of MFKR!