1. Is there any footage from the Painface reunion show? (HeIsLegend)

My stepson, Calrissian, shot the show with his camera, but I honestly haven’t checked it out yet. I rarely watch video footage of myself. I will soon, though, and if it turned out okay, I’ll have it on my AndersColsefni.com site. I’ll let you know when that site launches.

2. Several years ago untitled live Slipknot track surfaced on MFKRBoard. Main riff and song structure of this track bears strong resemblance to Eeyore on S/T Slipknot album. What is the title of this song and was it ever recorded in a studio ? (Interlooper)

I don’t recall that. If someone has a copy I can hear, I’ll tell you what I know. However, you have to understand that 16 years ago, we were writing all sorts of songs in all veins of music. The only thing tying it together was the metal influence. I just heard “Carve” for the first time in 14 years, and didn’t remember most of it. Lol.

3. What ever happened to that DVD that you were planning on release a few years back with old Slipknot footage and such? I heard about it, but then nothing after that. (sicness)

I don’t have any Slipknot video footage, nor do I have most of the studio recordings we did to show Roadrunner we were worth signing (that thing everyone calls “Crowz”). If I gave anyone the impression that I did, I apologize. It must have been something I ate. Lol. I had, at one time, a VCR recording of the New Year’s Eve show we did, but I can’t locate that. If I do, I’ll try to get it online.

4. In the unofficial biography book ‘Slipknot Unmasked’ there is a photo of you performing on stage with Slipknot (definitely since your face is covered with electrical tape in it) and on your left is a
right handed bald guitarist who has no mask on, can barely see his face in the photo due to head banging but to me it looks a lot like Craig. Could you perhaps shed some light on that for us? Did Craig perform unmasked live during the short period he played guitar in the band?(Master of Crowz)

That was actually Jeremy Easley, bassist for Painface, which is the band that came from. I wore the same getup during most of Painface. Once I started becoming aware that my up-n-down weight was having a negative effect, I started wearing a priest’s gown. It’s a bitch working like crazy for 8 months, then sitting and doing nothing for 4. I don’t have that problem anymore.

5. Andy, did you use Vintage Slipknot Plastic Electrical tape when you were in the band? (lol) (Master of Crowz) 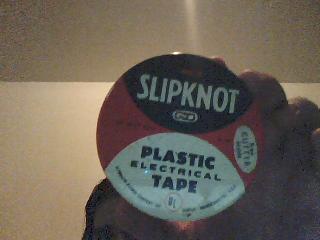 Holy crap! That’s freekin’ sweet! Is that a gag that someone made, or is it legitimate? How ironic would that be?
Uh, no. I didn’t use that brand. I think it was 3M. lol

6. Do u sing (or scream) in the shower?(xxleftbehindxx)

What an awesome question. Never heard this one before! No. My family would think I was having too much fun in the shower. lol

7. Andy, with the death of Paul Gray, what are your thoughts on releasing old stuff and Donnie’s position as touring bass player? (The Grater Vayne)

Paul, for lack of a better way to describe his life and death, was a pure metal musician. One who I’ve written over a hundred songs with personally over the years (never played with a full band, mostly). He died the only way he could have. He would want people to hear our old stuff. I’m pretty sure everyone has already heard everything we ever recorded, as I don’t have most. The only reason Roadrunner and Slipknot would be against releasing old music is because it no longer represents who they are now, or they aren’t happy with the performance. They also will not accept the release of anything that has ME on it. As of now, that is. Tomorrow-who knows?
As for Donnie-good for him! As I have known him, he is a purely wonderful person. I’ve really missed being in a band with him. He is one of the best metal guitarists I know. He’s a bit shorter than Paul, heheheh, but I’m sure he’ll manage just fine. Good for him.

8. In the song ‘Slipknot’ there is a sample that comes on early in the track intro. What does it say and where is it from? The sample at around the 2:50 mark from the 96 MFKR version. (Master of Crowz)

Law don’t go ‘round here, savvy? That was me mimicking a part from the movie “Tombstone”. Shawn and I sampled parts from that, Scarface, Jurassic Park (now, that’s one big pile of shit), and from weird Public Television shows for Craig to use randomly live. The part we put in the song had to be done manually because the actual sample didn’t fit rhythmically.

9. With Slipknot’s future looking dimmer and dimmer, meaning the band as we know them, today, since the passing of Paul, has there been any consideration from yourself and any of the other former/current long time members, of rejoining the band and continuing where “Early Era” Slipknot left off? To kind of “finish what was started” before you left?

Not as far as I know. Nobody in Slipknot has attempted to get ahold of me since Corey did before Paul’s funeral. Prior to that, Paul was the only one who would call me. I can’t even really imagine being in a band with those other guys again, but that doesn’t mean I wouldn’t. I just can’t say right now.

10. You mentioned, on your facebook page, that you will be releasing some old material in the near future, but didn’t really specify what material it would be. Any of that material Slipknot/Slipknot related? Painface/OAPH?

It will be from all the above. Including Vice Grip Throttle and All That Crawls, which is my son and me. The recording includes Ed Henry and Rick Stuber, but Josh and I are are doing it by ourselves for now.

11. Over the years, your musical expressions seemed to have changed a bit since leaving Slipknot. While Painface seemed to be rather similar, OAPH and Vice Grip Throttle seem to be almost a complete opposite in terms of song structure, and in some instances, even vocal styles. What was your motivation for making such drastic changes to how you express yourself musically?

I’m getting older. Shawn is partly responsible for how Painface turned into On A Pale Horse. He suggested we move into a different style, one that is still in our vein. Stoner metal. I think now he just wanted us to be MORE different than Slipknot. I didn’t think we were much like them at all. This style of music really grabbed me. You can sing ANYthing with this kind of music and it fits. It’s kinda rootsy. Anyhow-I was technically ousted (my choice) from Slipknot for not singing cleanly enough for radio. I hadn’t sang cleanly since grade-school chorus, but I sang with the Des Moines Symphony in 3rd grade. I got tired of only growling and screaming, and I get bored hearing songs that are only just that. My favorite singers are NOT growlers. Dax Riggs, Rocco DeLuca, I’m amazed at their vocal control. I’ve been steadily working on my clean voice for the last 10 years, and now I feel comfortable singing, screaming, and growling all in the same song, if necessary (provided I have a steady 3 or more rehearsals each week to keep my vocals chords warm). I want to be able to be happy with what I have done, and that means keeping it interesting to myself for starters. I haven’t been happy about everything I’ve done.

12. If you could change ONE thing about your time in Slipknot, what would it be, and why?

Back in Pale Horse, Shawn told me “Nobody likes a fat singer.” in passing one time. Didn’t go on about it, just said it. I suppose, if that’s the way it was, I would have kept my shirt on during shows. Lol. I was going for gross. I thought we ALL were.

13. As time goes on, more and more people are finding out about Slipknot’s past. Especially, since Donnie stepped up to take on touring duties. With Mate.Feed.Kill.Repeat (and other associate recordings) being not available for legal sale/distribution, it has led to a lot of downloading of that material on the “black market” so to speak. What is your standpoint on this matter?

It is what it is. Money makes the world turn. You can’t stop it. It has definatley hindered MY ability to make a single dime off the music I’ve recorded, but I still keep trying to do it.

14. When you’re not working, taking care of your family, or making music, what does Andrew Rouw like to do in his spare time?

There is no spare time. Lol. Really, I may get a few hours on the weekend to just fuck-off, and then I may just play Video games on my PC or watch something on television. Pretty boring, really. Occasionally, my wife and I (and sometime Lucian, my 17 year old) will go play Frisbee golf. Yes, that’s right, I’m ¼ hippie now. Pffffthpt! Mostly, we just spend the time discussing life with each other. We’re all in therapy, so we all gots things to talk about.

15. What is one thing that the average fan might not know about you?

I have an incredibly low self-esteem. I assume someone I don’t know will hate me once they meet me. That‘s rarely the case, but that‘s part of why I‘m in therapy! Lol.

Thanks for taking the time to answer our questions, and we all look forward to hearing from you in the near future.

-Interview by Jake aka Pyramid Head 2011